What You Should Know About Living with Fibroids

You are here: Home / Uncategorized / What You Should Know About Living with Fibroids 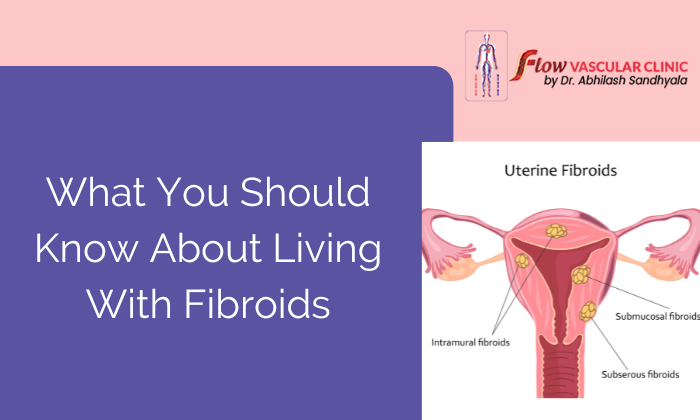 We watch our mother occupied with housekeeping or business tasks. They play a crucial role in everyone’s lives every day. Starting with home chores and progressing to family health care. When it comes to their personal health, they will just suffer in silence while they battle various health difficulties. It might be irregular menstruation, PCOS, or other autoimmune disorder, or even postpartum recovery.

Women face a variety of illnesses and ailments throughout their lives. And just a handful of these are tough to debate. Fibroids or Uterine fibroids, commonly known as Uterine Myoma, are one of them. In this blog, we will learn what we have to know about living with Fibroids.

Uterine Fibroids or Uterine Myoma are non-cancerous tumors that are made of smooth muscle cells and the fibrous connective tissue that are usually seen during childbearing years. Another name of the fibroids is Leiomyomas.

Fibroids range in size from invisible seedlings to bulky masses that can deform and expand the uterus. You might have a single fibroid or many. Multiple fibroids can cause the uterus to enlarge so much that it approaches the rib cage and adds weight in severe situations.

Did you know? Almost 70 – 80% of the women experience fibroids in their life. And most women experience uterine fibroids without knowing them as they often cause no symptoms. In most cases, Fibroids may be discovered by chance during a pelvic exam or prenatal ultrasound.

Coming to the types, there are 3 types of uterine Fibroids

After learning about the many types of fibroids and how frequent they are, you may be thinking what causes these fibroids.

Obese women are more likely to get fibroids, and there is a relationship between fibroids and women who eat a lot of red meat. Though, the causes of fibroids are unknown. But the research and the few clinical experiences points that genetic changes, hormones, overweight, pregnancy, even age can have a hand in causing these tumors.
Let’s see how are these factors are into the causes

As mentioned earlier, Most women experiencing fibroids show no symptoms. However, the location, size, and number of fibroids can all have an impact on symptoms. Some fibroids can be really painful.

The following are the most prevalent indications and symptoms of uterine fibroids in women who have symptoms:

In addition to the numerous physical symptoms, living with fibroids has an emotional impact on women. Many women encounter challenges with sadness, anxiety, decreased quality of life, and changes in body image.

Till now we have discussed an overview of Fibroids, now let’s see the most frequently asked question on Fibroids.

1.How much blood loss is too much?

Vaginal bleeding is one of the most common side effects of uterine fibroids. But Bleeding too much is dangerous and can lead to other complications like anemia and infertility.

A fibroid can cause severe vaginal bleeding by distorting the uterine cavity or womb. Any quantity of bleeding that impairs your everyday quality of life is cause for concern. Other include

2.Do Fibroids Affect Pregnancy and Fertility?

The most often asked question regarding fibroids is whether they affect pregnancy. And if they do, how?

A fibroid increases the likelihood of a premature delivery or miscarriage. In a few cases, Fibroids can overrun their blood supply and produce significant discomfort. Fibroids can also shift the baby’s position in the uterus, raising the chances of miscarriage, premature birth, and caesarean section.

If you are experiencing Fibroids and planning to have a baby, then it is important to discuss with your doctor how fibroids may influence your fertility.

3.How are Fibroid Diagnosed?

You’ll need to see a gynecologist for a pelvic exam in order to acquire a correct diagnosis. This exam is done to determine the health, size, and shape of your uterus.

During a routine pelvic exam, your doctor should be able to detect the fibroid. To confirm the position and size of the fibroid, your doctor may order an ultrasound or other imaging tests such as an MRI or hysterosalpingography, which is an X-ray used to scan the interior of the uterus and fallopian tubes.

Lab testing, such as a full blood panel or other blood tests, can also be useful in detecting fibroids-related diseases such as anemia.

The majority of fibroids do not produce symptoms and do not necessitate treatment. Because most fibroids cease to develop and may even shrink as women approach menopause, your doctor may first advise monitoring. Some fibroids, however, may necessitate more aggressive treatment, depending on:

The technique for Uterine Fibroid Embolization in Hyderabad is as follows: To begin, your radiologist will utilize a fluoroscope to complete this operation. A fluoroscope creates moving pictures of interior organs, which are then shown on a computer monitor. Anesthesia will be administered to alleviate your pain. Your doctor will next create a tiny incision under the skin above your femoral artery, a big blood vessel that runs longitudinally through your groyne. Your doctor will next put a catheter into either the left or right artery that feeds the fibroid.

Following that, a specific X-Ray dye is injected into the uterine artery and its branches, making it visible on the fluoroscope’s monitor and illuminating the fibroids. The radiologist uses this to locate the appropriate uterine artery and inject small plastic or gelatin particles into the blood vessel. These particles block blood supply to the fibroids, causing them to diminish in size. This technique will be repeated on another artery when the first one is done, and the full treatment will take 1 to 1/2 hours.

Uterine Fibroid Embolisation is the most effective method of removing fibroids. It has a 90% success rate. You will be able to continue your everyday activities almost immediately after recovering in one day. So go ahead and do it! Dr. Abhilash Sandhyala of Flow Vascular Clinic can cure Uterine Fibroid Embolization in Hyderabad. Book your appointment here