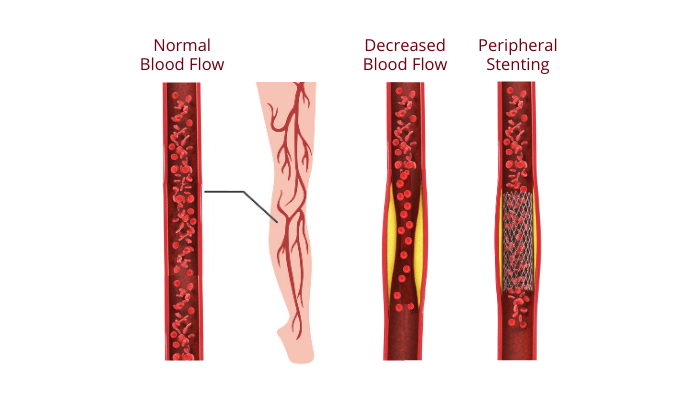 Peripheral vascular disease is a disease of arteries of the body other than those of the heart and brain. The peripheral vascular disease is mostly seen in the arteries of the lower limbs ( legs ) but sometimes in Aorta and upper limbs. Hence it is also known as peripheral arterial disease. This Peripheral artery disease treatment in hyderabad can be best diagnosed by Dr.Abhilash Sandhya in the Flow Vascular Clinic.

Most common cause of Peripheral vascular disease is plaque build up in the lumen of the arteries. These plaques are formed in individuals who have high levels of cholesterol, high blood pressure, diabetes, obesity and habit of cigarette smoking and tobacco cheweing. They are more common in males but do occur in females as well. The occurrence of Peripheral vascular disease is more common in the older age group but can occur at any age in an adult life.

In Peripheral vascular disease, there is narrowing or blockage of the arteries which causes decreased blood flow to the legs. Because of this, during walking or exercising, the leg muscles do not get enough blood supply and result in cramps and pain which we call as 'Claudication Pain'. This pain mostly relieves on rest but sometimes and in severe cases when the diseases progresses there will be continous pain even during rest as well. The patient can also complain of tingling, numbness and weakness and blackish discoloration in the legs. The symptoms can also worsen over the time leading to inability to walk, skin ulcers, bluish/reddish/blackish discoloration of the skin, cold and clammy skin and poor growth of nails and hair in the affected leg. This disease is mostly ignored in wrongly assuming that it is a normal part of ageing process rather than consulting a doctor or Interventional Radiologist / Endo Vascular Surgeon

These symptoms and the underlying cause if left untreated may give rise to complications such as infection of the legs and gangrene. Leg might even have to be amputated if the infection cannot be controlled.

The diagnosis is mostly done on the basis of the symptoms and the clinical examination performed by a Interventional Radiologist / Endo Vascular Surgeon . Ankle-Brachial index is one of the initial tests used to diagnose the peripheral vascular disease. Angiography, USG, MRA and CT scans are also useful in the diagnosis of PVD and often time confirmatory and helps the treating doctor to come to a conclusion about the direction of treatment.

The Peripheral Vascular disease is treated according to the severity of the disease. If it is in initial stages, lifestyle modifications like smoking cessation, management of concomitant conditions like obesity, diabetes and hypertension, medications like statins to lower the levels of cholesterol, anti- platelet agents which help in reducing blood clots. Regular exercise will also help in reducing the progress of the disease.

Even after all these treatments, the symptoms persist then the patient will have to see an Endo Vascular surgeon / Interventional radiologist in hyderabad

Peripheral Vascular Disease / Diabetic Foot Non-Surgical treatment and how to avoid leg amputation, heal your foot ulcers and save your legs?

Under the guidance of imaging in a cath lab, the Interventional Radiologist / Endovascular surgeon inserts a catheter (a tube ) through the femoral artery in the groin along with a wire, to the location of the plaque in the blocked artery. Then the Interventional Radiologist / Endovascular surgeon tries to cross the diseased arteries ( the blockage ) using a combination of wires and complex techniques and skills. One the doctor crosses the diseased part, over the wire he inflates a balloon.

This balloon after inflation causes the blocked or narrowed vessel to open up. If the opening is not remaining patent or the walls of the arteries are collapsing against each other even after inflation, a stent (metal mesh tube) might be put in place.

The stent hold the lumen of the arterial wall in place. This stent is cylindrical in shape and made up of nitinol. This treatment is minimally invasive. A very small incision needs to be taken to introduce the catheter. Traditional invasive surgery has now a very strong alternative in the form of balloon angioplasty and stenting.

In traditional invasive surgery, there is larger incision and more area is exposed making the patient prone to infections and post operative complications. Where as in, balloon angioplasty / stenting the incision is very small; there is less risk of bleeding, infections and post operative complications. The recovery time is also less in balloon angioplasty and peripheral stenting.

Traditionally and in olden days because there was no alternative treatment available, most surgeons used to operate and amputate ( cut off the legs ) leading to loss of limbs and the subsequent emotional and physical issues would arise. But because of this new treatment of stenting and angioplasty, now we can totally save your legs and amputation and save your legs and make the patient walk again and often times the patient walks home the very next day. This treatment also saves the patient from developing gangrene in the foot.

Do you think you might be suffering from peripheral vascular disease or diabetic foot? Save your legs from amputation and gangrene by Consulting Dr.Abhlilash Sandhyala, the best Interventional Radiologist / Endo Vascular Surgeon in Hyderabad , to get safe and complete treatment of the Peripheral Artery Disease Treatment In Hyderabad /Peripheral Vascular Disease / Diabetic foot. tel:9989649498

Get In Touch With Us